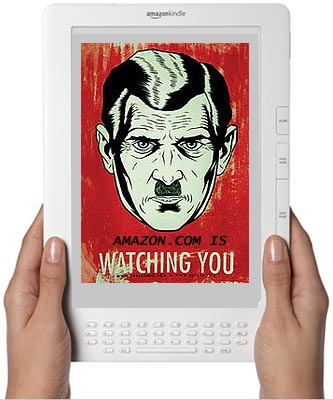 By now most everyone online knows that last week Amazon deleted copies of George Orwell’s “Animal Farm” and “1984” from customers’ Kindles. They did so, they say, because Amazon was fooled by the supplier of the e-books. It turns out that they didn’t have the rights.

There is nothing explicitly stated in Amazon’s licensing agreement with customers, however, to allow it (effectively) to enter a customer’s Kindle and delete what the customer has paid for.

The Kindle License Agreement and Terms of Use, states as follows:

There are no restrictions, no caveats that would hinder the conclusion that Amazon breached this clause.

That said, it should be clear that while Amazon may sell books, it does not sell e-books. It licenses software. As the Terms of Use state:

– Digital Content will be deemed licensed to you by Amazon under this Agreement unless otherwise expressly provided by Amazon.

– All of the Software is licensed, not sold, and such license is non-exclusive.

– You acknowledge that the sale of the Device to you does not transfer to you title to or ownership of any intellectual property rights of Amazon or its suppliers.

While that latter provision is really meant to apply to the underlying work and not the the particular copy on your Kindle, it does drive the point home that the End User is nobody, at least in the opinion of Amazon’s lawyers.

The current uproar should make Amazon wary of repeating such an episode, but more importantly it raises the issues of both the value and risk of paying for digital content which a company has only licensed and to which the company has ongoing access via the electronic device on which it is stored. Think of it like going to a book store and having the clerk follow you home to stick his foot in your front door.

Numerous kinds of disputes can result in a company (or an individual) losing the right to distribute a written text or any other copyrightable property, including sound recordings, musical compositions, films and videos. Such disputes include copyright infringement, libel, fraud, misrepresentation (apparently as in the case of the Orwell e-books), negligence and contractual differences.

Due to unauthorized sampling, Warner Bros. lost the right to distribute the original version of Biz Markie’s album, “Get A Haircut.” As part of the verdict, the court ordered Warner to delete the album from its catalog and recall all extant copies from stores and distributors, as far as practicable. (Similarly, Arista was ordered to yank the original release of the Notorious B.I.G.’s “Ready To Die.”) How much better it would have been for the plaintiffs if the court could have ordered the defendants to pull every copy out of the hands of consumers!

The capability (and evident willingness) of Amazon to remove intellectual property not just from its website, but from its consumers’ devices, is a welcome gift to plaintiffs in disputes over intellectual property, since it is usually the desire of such plaintiffs to have the offending work obliterated from the face of the earth. Those who value privacy or have a less Orwellian view of how information should be controlled will understand why this is not good.

Perhaps even more chilling is the possibility that Amazon’s capabilities and policies could be exploited by the government. Amazon sells plenty of “adult” books, any number of which could be found “obscene” in some locale. It is an axiom of federal obscenity law that no one has the right to receive obscenity even for private consumption. (One needn’t even know the item is “obscene.” Under the law, one only need know that the material is “sexually oriented.”) Now an e-book is found on someone’s computer, say, in the Middle District of Georgia, or the Western District of Pennsylvania, and is declared to be “obscene” by a jury. Amazon might or might not stop offering it for sale, but it is certain that Amazon has the data of everyone who has downloaded the e-book. What happens when the government approaches Amazon and asks it to turn over information on those customers? What if the government takes an interest in who’s reading certain other kinds of books – for example, those that pertain to terrorism or radical environmentalism or animal rights – and wants to know what readers are thinking about them?

The policies are already in place for Amazon’s cooperation:

– No Illegal Use and Reservation of Rights. You may not use the Device, the Service or the Digital Content for any illegal purpose.

Under federal law, it is illegal to receive obscene matter via “interstate commerce,” e.g., Amazon’s whispersynch network. Furthermore, someone who applied knowledge s/he learned in a book to committing any illegal act would be in breach of this provision.)

– The Device Software will provide Amazon with data about your Device and its interaction with the Service (such as available memory, up-time, log files and signal strength) and information related to the content on your Device and your use of it (such as automatic bookmarking of the last page read and content deletions from the Device). Annotations, bookmarks, notes, highlights, or similar markings you make in your Device are backed up through the Service.

Marking passages and highlights could be used against someone in a prosecution, at the very least to impeach his or her character.

– Protection of Amazon.com and Others: We release account and other personal information when we believe release is appropriate to comply with the law; … or protect the rights, property, or safety of Amazon.com, our users, or others.

This overbroad provision speaks for itself. Amazon has reserved the right to do anything it believes is “appropriate,” whatever that means.

This article is not an attack on Amazon, but a suggestion that it take a good look at how it formulates policy, respects customers and defends privacy. In many ways, intellectual property and criminal laws lag far behind developments in digital commerce and without big and powerful companies like Amazon taking principled stands, consumers can expect more incursions into their privacy and freedom. Orwell would not be amused.

(For more information on the Biz Markie and Notorious B.I.G. disputes, see “A Short History of Sample Clearing” on Clearance 13′-8″, Inc.’, website.